The gracefulness and functionality
of Japan’s oldest prison building

The Former Nara Prison, designed by Keijiro Yamashita, a public worker for the Ministry of Law who designed many prisons and court houses, was built in July, 1908 (the 41st year of Meiji), as one of those five prisons called “the Meiji Five Great Prisons” interspersed across the country (their locations were Chiba, Kanazawa, Nara, Nagasaki, and Kagoshima). Most of construction work was carried out by prisoners, and the bricks used were supplied from kilns they built themselves, as history tells. The Romanesque red brick edifice, with beautiful as well as profound taste still now lingering, has then-advanced technology and design elaborated here and there, and the central region of the grounds with an area of about 106,000 square meters is allotted for detention wards extending radially, which is called “Havilland system”. The Former Nara Prison, after closing its over 100 years’ life as a detention house in March, 2017 (the 29th year of Heisei), was designated as an important cultural asset in February, the same year, with its whole structure intact.

The Plan of The Former Nara Prison 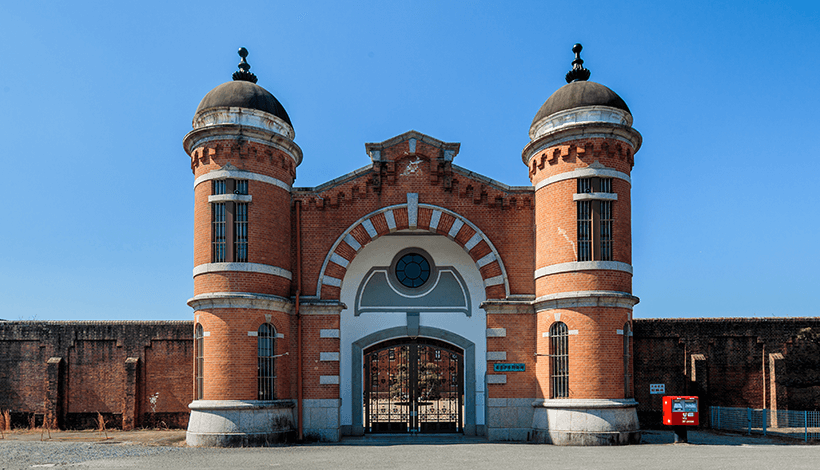 The turrets
The domed roofs are coated with mortar to prevent corrosion by rains and winds, with their tops gracefully adorned. Inside the turrets are flights of steps leading to the second floor within the front gate. There has been no change to the iron bars of the windows since the day they were set there. 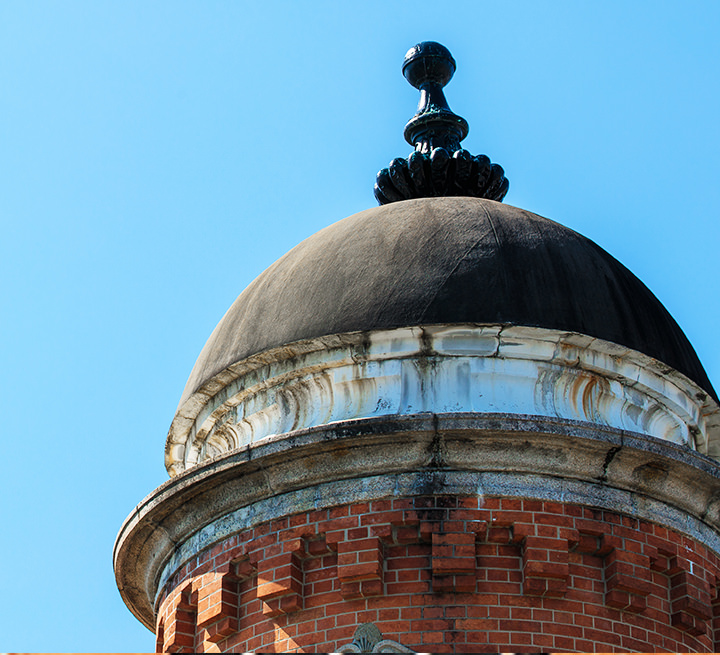 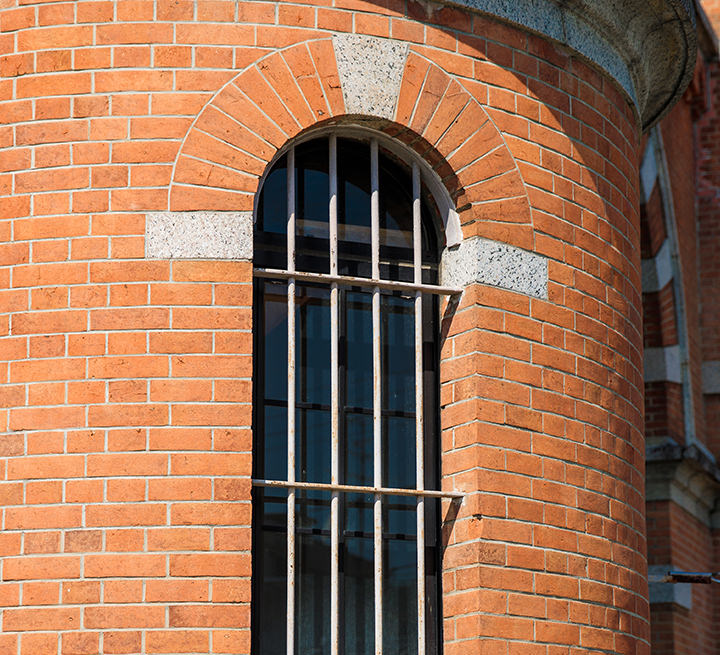 The Lombard band
The upper side of the main gate is adorned with the Lombard band we see in Romanesque-style buildings. This tooth-shaped adornment is the same characteristic design as seen here and there in other buildings in this site.

The walls
The bricks are laid in English style, alternately only a stretcher bond and only a header bond. The sides of the gate and windows are decorated with white granites polished with whetstone. 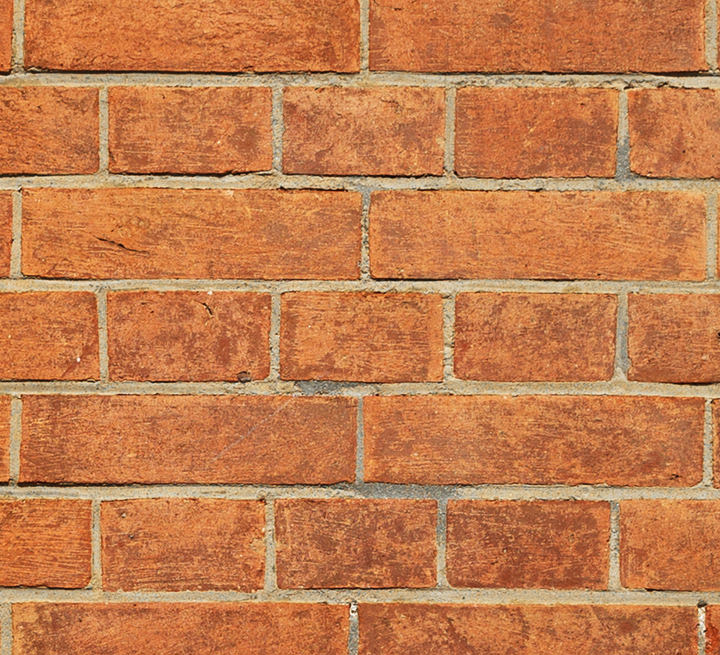 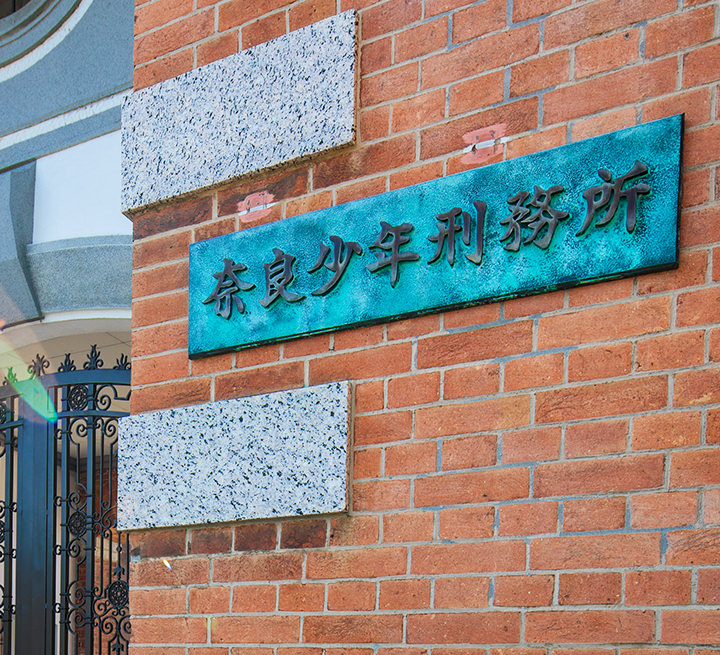 Entrance leading to the Administrative building

This is a two-storied red brick building with a roof of pantiles, with a blue-green turret in the middle. The roof features wooden trusses, and the flooring of the first and second stories is also of wood.
The turret
In the center of the Administrative building is a blue-green turret with a characteristic roof made of copper sheets. On the top of the turret is set a lightning rod. On the upper part of the second floor is seen a circular window with beautiful granite ornaments. 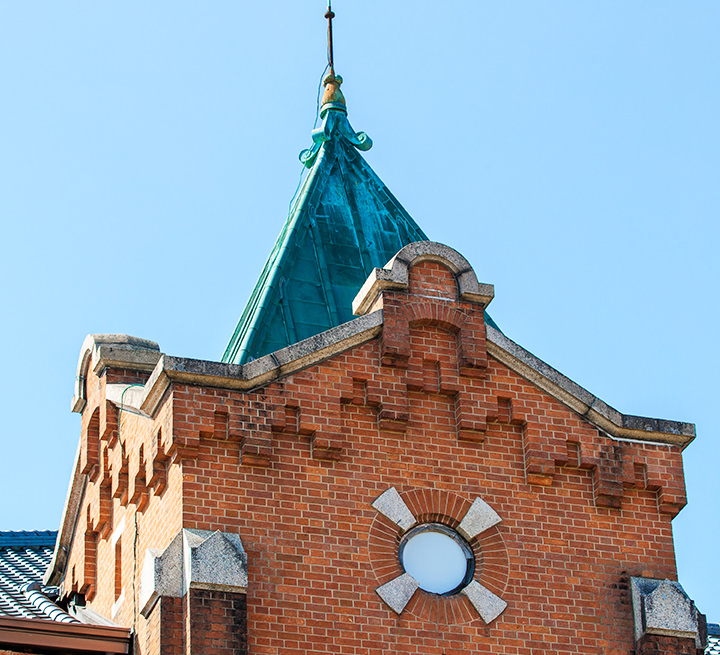 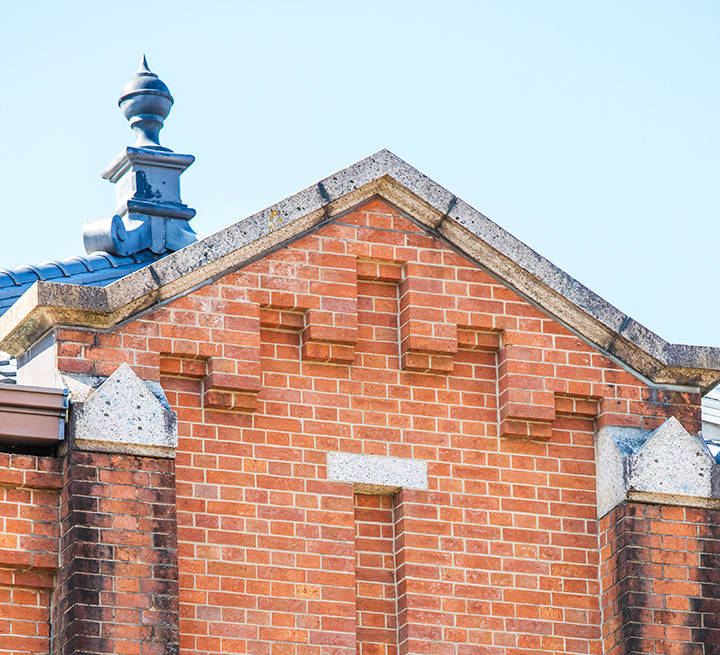 The window
The windows are tall with a semicircle arch window and a comb-shaped window symmetrically arranged on either side. The upper parts of the arched windows are structured with V-shaped bricks to counter the weight from the above.

The storehouses
There are red brick houses on either side of the garden leading from the main gate to the Administrative building. The brackets at the entrance are engraved with those white circular forms that we often see on other buildings at the site. 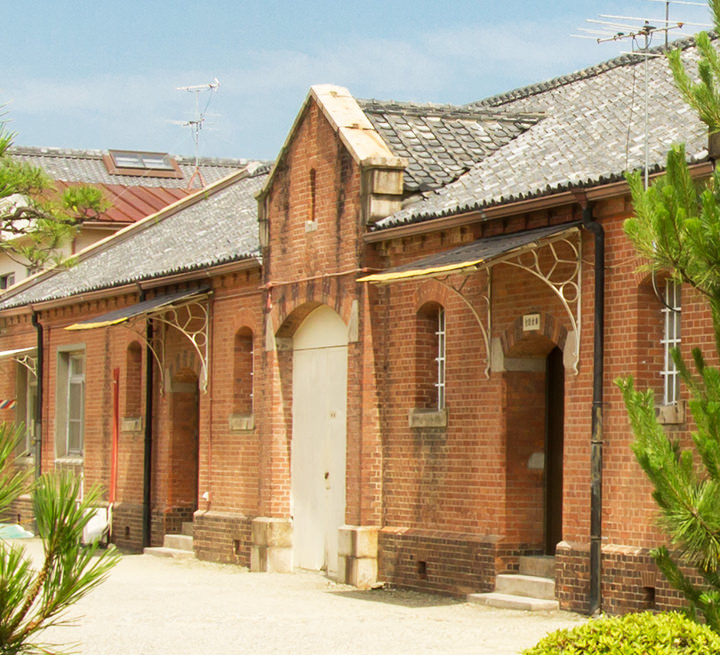 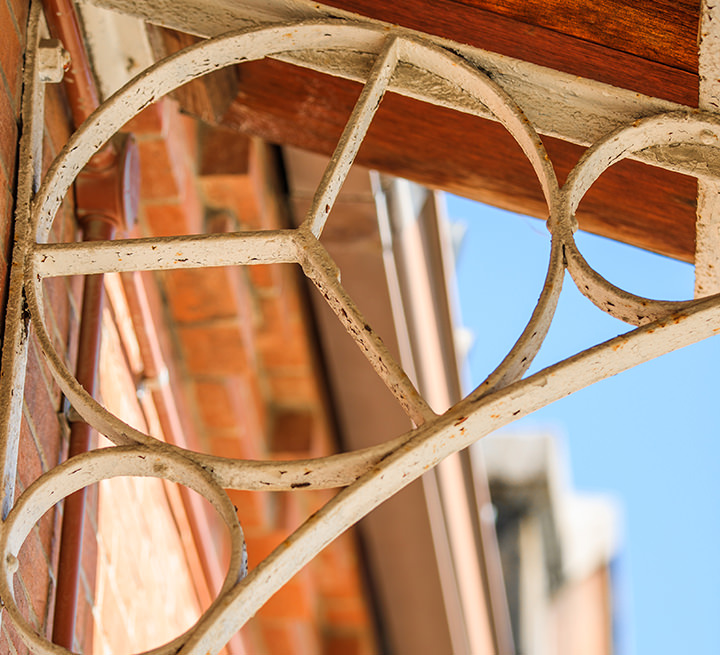 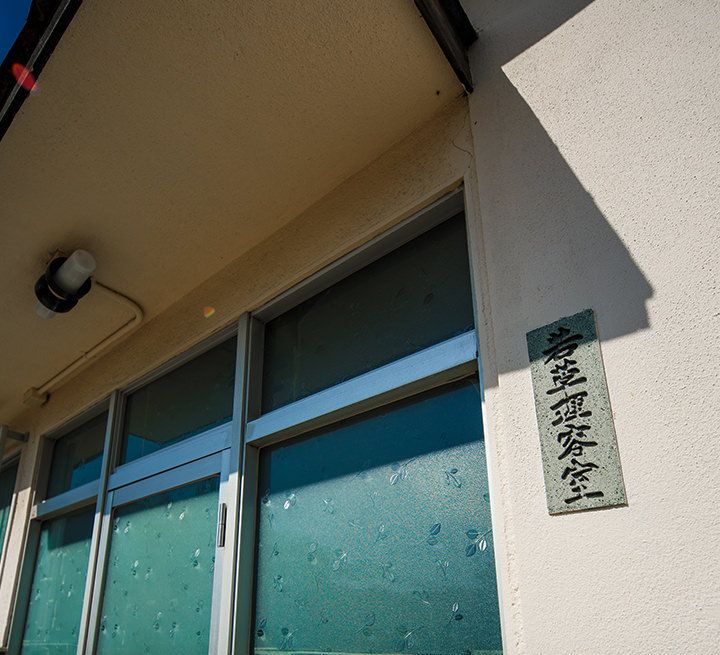 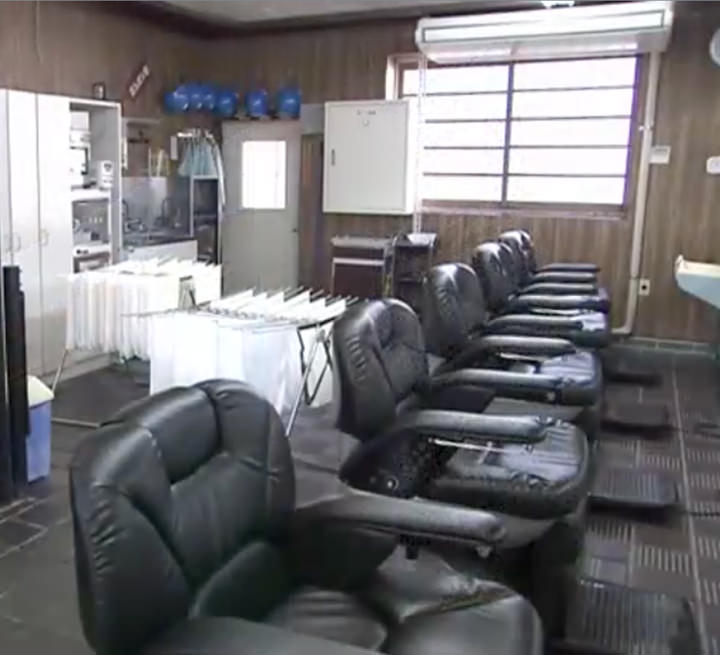 At the center of the five two-storied radially extending wards is a big hall with a watchhouse attached to it. From this watchhouse situated on the second floor, the guards can look and see how things are going not only on the second floor, but also on the first floor, which has see-through roofs.
The ceiling
This wooden, radially framed ceiling has a high window that lets in mellow sunlight. 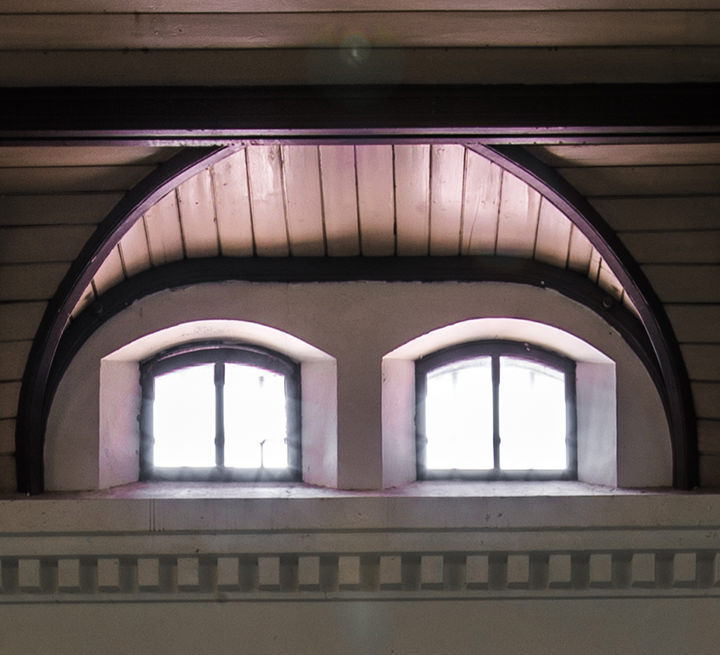 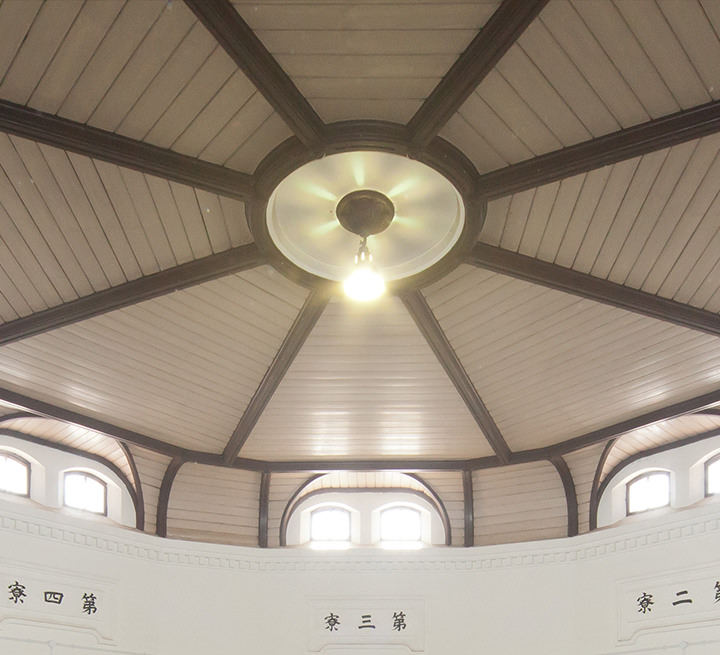 The Havilland system
Setting confinement wards in a radial form with the watchhouse at its pivot has enabled the guards to oversee all the five wards at a time.
＞An aerial view of the Former Nara Prison 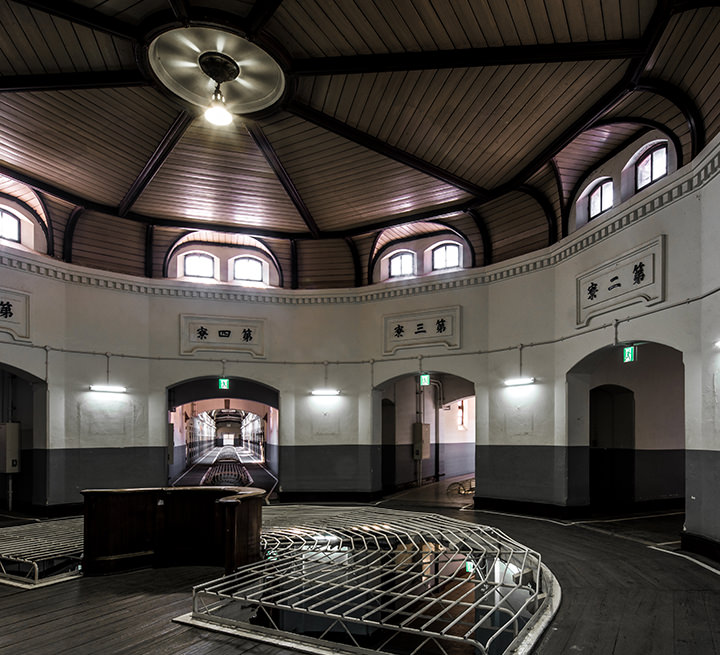 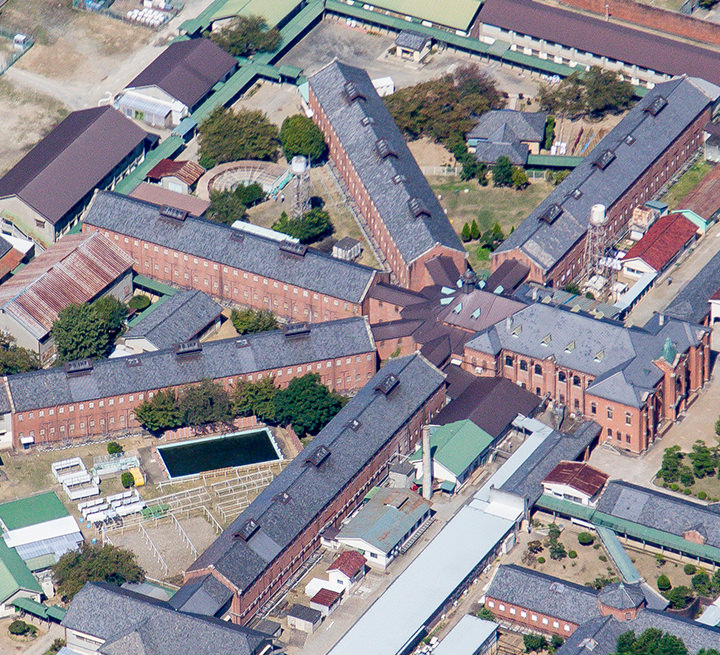 A two-storied brick building with single rooms distributed in Ward I through Ward IV, and with shared rooms in Ward V, having about 500 rooms in total. In the inmost part of the first floor is located an inspection room for the inmates’ belongings as they go out to work.
The ceiling
On the ceiling is placed a very big skylight window. Some parts of the first floor’s ceiling are of a drafty type, receiving light coming from the second floor. 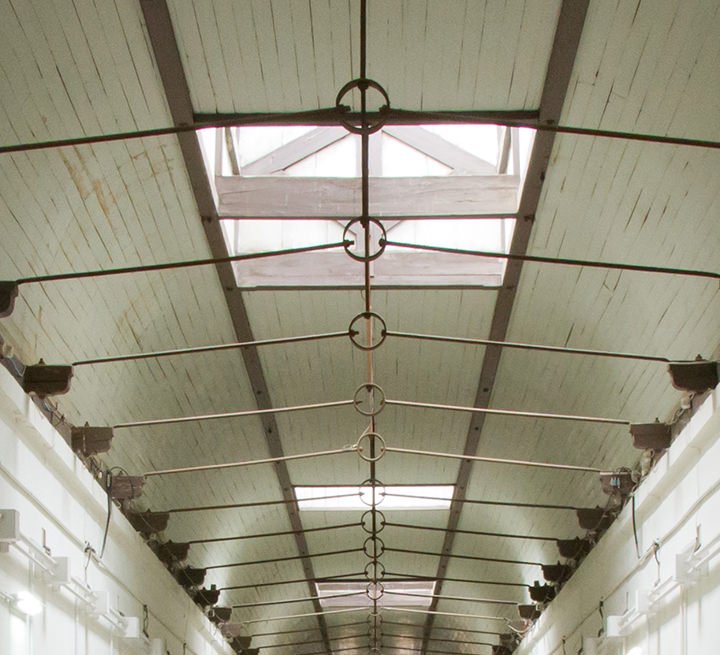 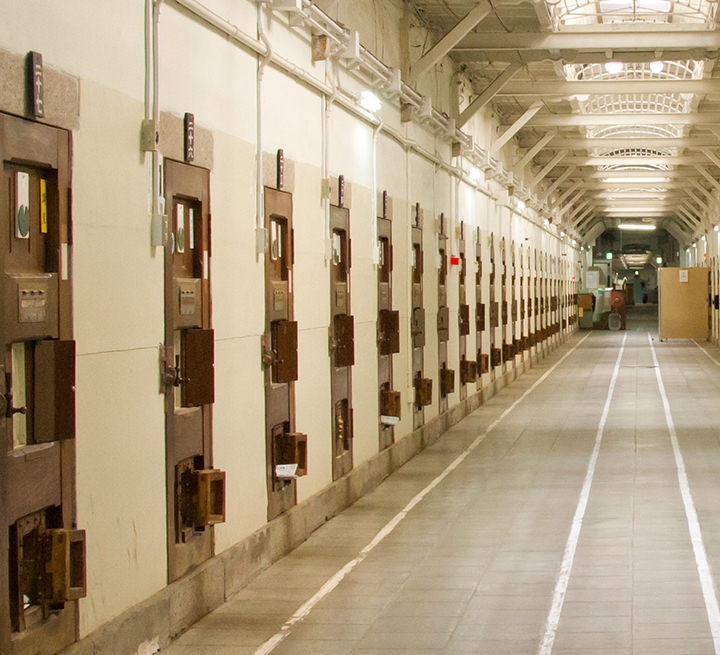 The floor
Granite was used in places where lots of people walked because of its excellent abrasion resistance.

Single rooms were introduced after a European fashion. Livability was greatly improved in comparison to that of the Edo period when several prisoners were confined in a one-and-a-half tatami room jail, which was poorly sheltered from wind and rain.
The doors
The heavy wooden doors were used since the Prison was built, with openings for inspection and eating utensils. The doors have no knobs, making it useless to try to open them from the inside, even if the doors are unlocked. 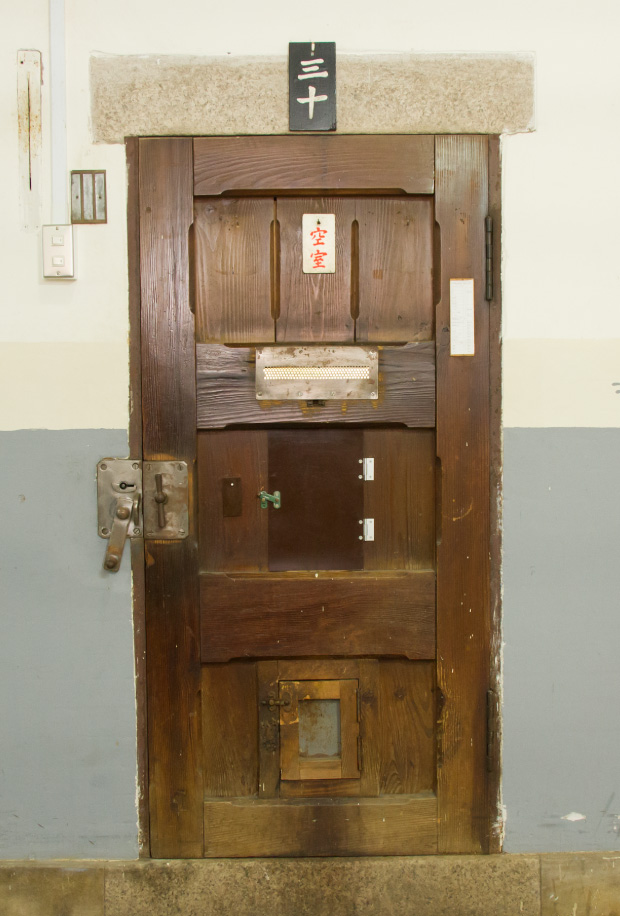 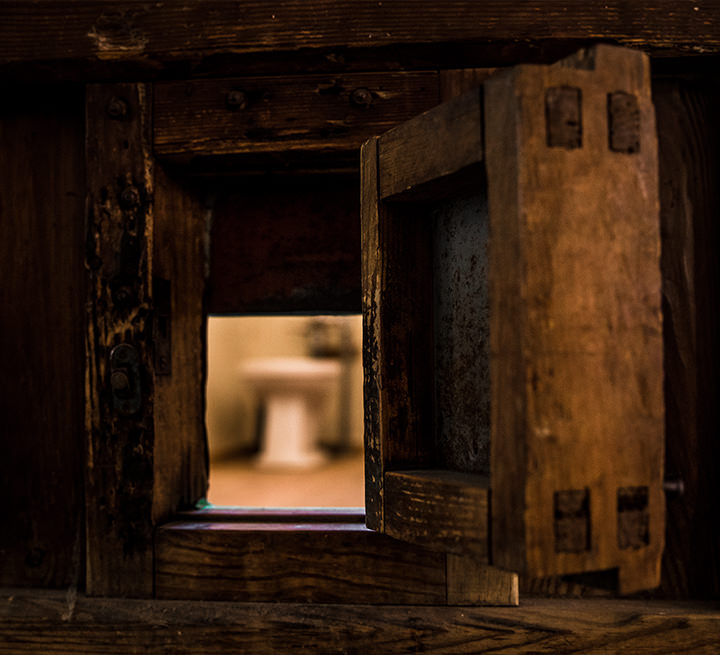 A huge playground is located in the southwestern part of the site, where a gathering of the prisoners was held every morning in front of the stone statue of “Self-Rehabilitation.”
The bricks
Bricks were kilned by contesting groups of inmates, and they are so laid on the roadbed leading from the playground to the training field as to show the logotypes of the groups. 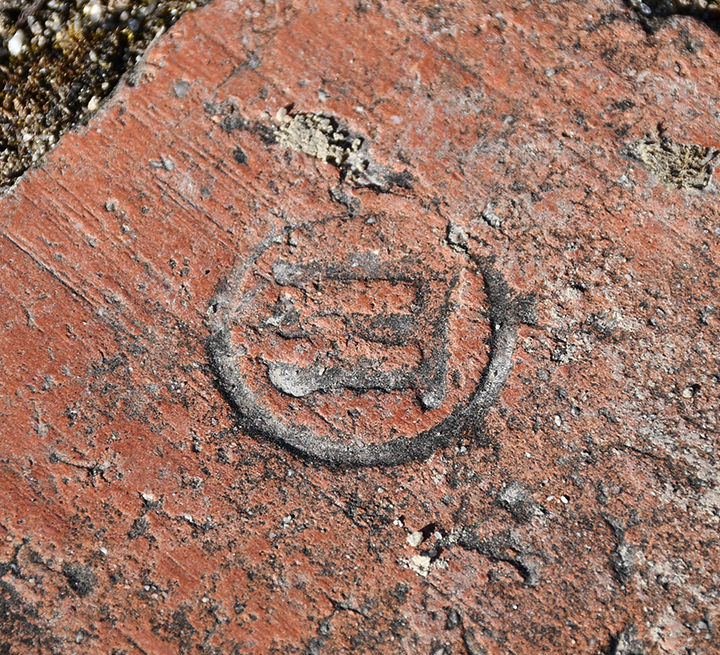 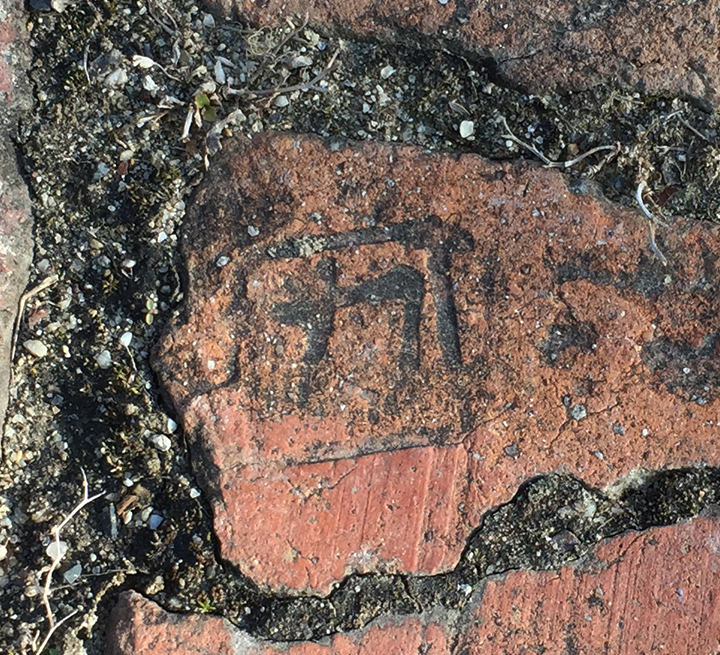 The fences
Brick walls and extended concrete ones surround the whole site of the structure, with vestiges of two old niches for guards. 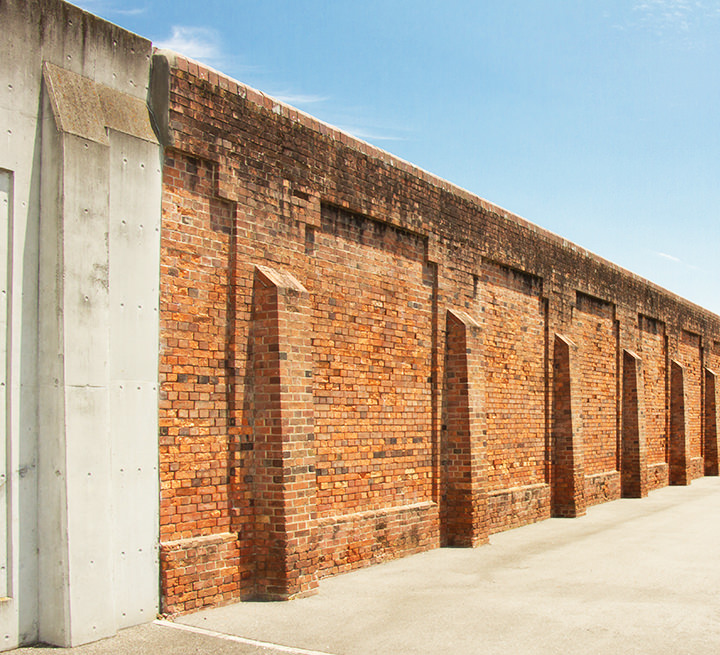 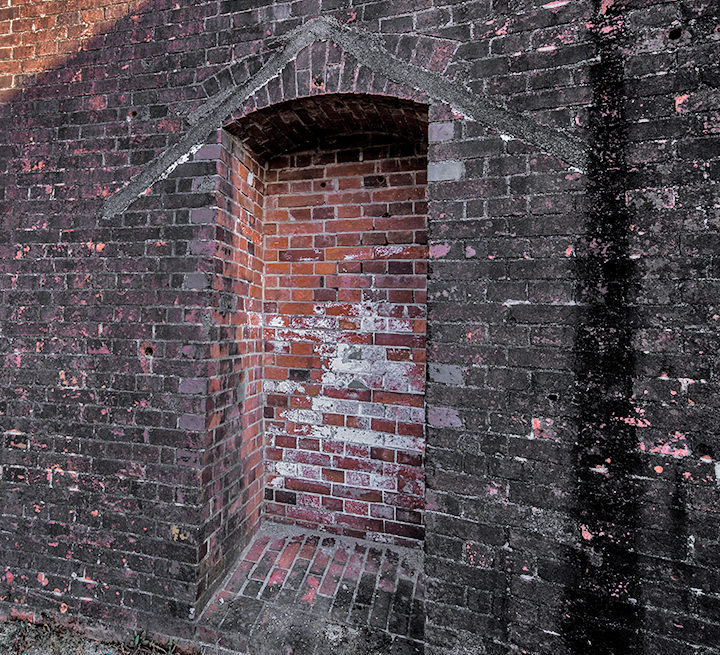